Every Halloween, Rhode Islanders tell the story of Mercy Brown: How she was stricken by a mysterious illness more than 100 years ago and followed her mother and sister to the grave. How her brother Edwin fell ill, too, and their father was persuaded that Mercy was a vampire who was rising from the dead to feed on Edwin's flesh. How old George T. Brown and some neighbors in Exeter dug up her body one wintry March day and found that it had shifted in the coffin. How her heart was burned on a rock after it was found to contain fresh blood. However Edwin was fed the ashes as a cure but died less than two months later, on May 2, 1892.

Now a researcher is saying Mercy Brown was not the first Rhode Island vampire case - that she was the fifth and last. State folklorist Michael E. Bell says he has unearthed evidence that what happened to the Browns happened to at least 15 other New England families.

In the process, Bell says, he has uncovered reminders of a far deadlier killer than vampires, one that doctors say is making a comeback after 30 years.

Tuberculosis, the disease that physician Frank Ryan, author of the 1993 book The Forgotten Plague, calls "the greatest killer in history," is the common thread that connects Mercy Brown to the long line of vampire cases that Bell says began in this country in 1793.

Tuberculosis is a highly communicable disease. It was not until the development of antibiotics in the 1940s and 1950s - more than half a century after the cause of tuberculosis was discovered - that doctors could offer a cure.

Rather than stand by helplessly while their children died of the illness that was then called consumption - because the victim literally wasted away - Bell says desperate parents turned to folklore, which taught that vampires were responsible for the spread of the disease.

In none of the Rhode Island cases was the word vampire ever mentioned. But, in each case, Bell says, people clearly believed that the surviving members of a family struck by tuberculosis could be saved if the dead were exhumed and there bodies dismembered, burned or otherwise disrupted before being returned to the grave.

"To characterize it as nothing but an ignorant superstition is to miss why the people involved thought it was reasonable," Bell says. "Medical science had failed. So that's when you turned to folklore. Folklore always has an answer."

Bell first heard the Mercy Brown story when he arrived here with a team of folklorists from the Library of Congress's Folk Life Center in 1979. He identified the 15 other New England cases by sifting through town records, reading local histories, tracing genealogies and listening to family yarns.

The first known case occurred in 1793 in Manchester, Vt., where a local history says "a strange infatuation took possession of the minds of the friends and connections of the family" of Capt. Isaac Burton after his second wife, Hulda, began to die of consumption, the disease that killed his first wife, Rachel, a few years before. Rachel's body was exhumed, and, after her liver, heart and lungs were burned, Hulda was made to consume the ashes.

Three years later, in Cumberland, R.I., Stephen Staples got the permission of the Cumberland Town Council to exhume the body of a recently deceased daughter "to try an experiment" to save the life of another daughter, who had also fallen ill.

"It's not as explicit" as the Vermont case, Bell says. But when he described his research into other exhumation cases to the historian who told him about the Cumberland case, Ruth Wallis Herndon, "she jumped up and said, 'That's got to be it!' "

The next Rhode Island vampire case occurs in Exeter, and, as in a fairy tale, the deaths were foretold by a dream. Stukeley "Snuffy" Tillinghast, a prosperous Pine Hill farmer, dreamed one night that half his orchard had died. For a long time, according to Sidney Rider, a 19th-century historian, Tillinghast had no idea what the dream meant. But then, Rider wrote, six of Tillinghast's 14 children died of consumption, one right after another, and a seventh child was taken ill. "They all complained that Sarah (the first child to die) was coming back at night and putting pressure on their bodies," Bell says. A common symptom of pulmonary tuberculosis is a feeling of pressure on the chest.

Unable to stop the dying, Tillinghast consulted neighbors, who persuaded him to open the six graves and examine the bodies. The first five bodies were found in advanced stages of decomposition, but Sarah's heart and arteries were filled with fresh blood. "It was clear at once to these astonished people that the cause of their trouble lay there before them," Rider wrote. They burned Sarah's heart, and reburied all the bodies. Nevertheless, Rider wrote, the seventh child stricken with illness died.

"I did some genealogical research," Bell says. "I found that there was a Stukeley Tillinghast who had 14 children. Something like four children died in 1799." The three other deaths were an exaggeration, he says. "It's a better story to say half," Bell offers, "because of the dream."

In the next Rhode Island case, in 1827 in Foster, the remains of Nancy Young, 19-year-old daughter of Capt. Levi Young, were dug up and burned. In what Bell says was a variation of the vampire myth, the surviving family members inhaled the fumes. Genealogical research shows that four of Young's remaining eight children died anyway. Two sons and a daughter escaped.

The next exhumation case is sketchy. In 1874, according to a Catholic priest who Bell says believed in vampires, William G. Rose of Peace Dale had his 15-year-old daughter, Ruth Ellen, exhumed and her heart burned in the belief that she was causing the bodies of her relatives to waste away.

Bell says he has found connections between this case and two other suspected Rhode Island vampires. But, after the Mercy Brown exhumation in 1892, nobody in Rhode Island ever dug up the body of a suspected vampire again.

What made the practice die out? Bell theorizes that the discovery, in 1882, that tuberculosis was spread by bacteria finally began to take hold. In addition, the practice of embalming had reached rural areas, making it implausible to imagine that vampires were rising from the grave to search for blood.

Proof that New Englanders once believed in vampires doesn't come only from historical records. Three years ago, a lost cemetery in Griswold, Conn., yielded compelling evidence of the vampire myth. The cemetery was in a gravel pit run by a construction company. In the process of relocating the cemetery, the Connecticut state archeologist and some students found a coffin in which the bones of a 55-year-old man with the initials "J.B." had been rearranged. The upper leg bones had been crossed on the lower chest and the skull placed on the upper chest in a skull-and-crossbones pattern, said physical anthropologist Paul Sledzik. Lesions on the bones suggested tuberculosis, he said. The stake-in-the-heart legend notwithstanding, folklore prescribed other ways to kill vampires, says Sledzik, curator of anatomical collections at the National Museum of Health and Medicine. In the 19th century, Sledzik said, "the gist of 'killing the vampire' was to cause some disruption to the corpse." 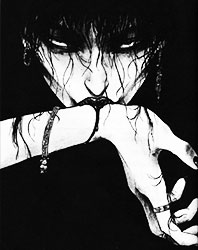